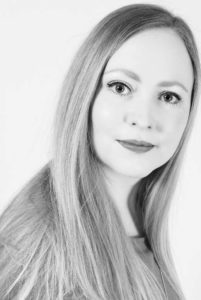 Deborah E Wilson lives in Worksop, Nottinghamshire. Her love of literature has been life-long but was truly ignited at The University of Lincoln, where she obtained First Class Honours in English. Her degree encouraged an interest in works from a broad range of historical periods, including Victorian and Gothic Literature, and she also began to share her own writing in Creative Writing seminars. She moved on to a career in teaching but has always been pulled by a desire to write her own prose and poetry. Her pastimes include singing, playing the piano, painting, burlesque dance and travelling back in time (or should that be into the future?) at Steampunk events.

An Artist’s Muse is her first novel, which introduces readers to a new breed of Victorian Gothic monster.

Nineteenth-century London. Clara Breslin is earning her keep in her brother’s apothecary. She isn’t interested in married life and spends her free time painting portraits of strangers who walk by her window. Her study is infuriatingly unexceptional – until she meets Matthias Tarasso, an actor.

Watching him perform, she finds herself captivated. Matthias becomes a dominant influence over her and his presence helps Clara create true masterpieces.

But an unseen evil is feeding on the tragedy that blights London’s streets and dwellings.

Clara suffers from horrific nightmares involving disease and fatality when customers of the apothecary grow ill from its remedies. After a suspicious death, Matthias becomes the main suspect. But who is really causing death, fatality and tragedy? Is it Matthias? Or Clara? Perhaps the truth behind the crime is far more insidious and cruel than anyone could have imagined…