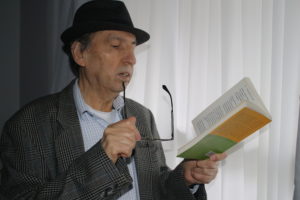 Manfredo Zaverpi, Anglo-Chilean fiction writer. Was born in southern Chile, he grew up in the countryside and witnessed the daily struggles of his fellow countrymen, toiling the land, merely managing to make ends meet. From his early years, became attracted to country folks’ story-telling and popular literature as well as music. Most of his writings are inspired by the harshness of the living conditions and reigning social inequalities in his country. He also became involved in political activities against social injustice and a keen part-time firefighter volunteer.  Managed to escape alive from his native country under the turmoil and violence ensued after the brutal civilian-military dictatorship that took over by overthrowing a fully legitimate and democratic­–elected government. He had to escape to neighbouring Argentina, where he was subsequently imprisoned, beaten and tortured senseless only because he was a Chilean and suspected left-wing sympathiser.

Zaverpi, after arriving in the United Kingdom, became an economist and worked in business administration and accountancy but always edging to put pen and paper began to write some short stories, with some being published, firstly in 2005 in collection of short stories in London entitled: “Anthology of Latin American Short Stories”  which included one his work and then Victorina Press’ short stories anthology literary competition “Violeta Walks on Foreign Lands” in 2017, where the winner was his story “The Cantora and her Vihuela”

His debut’s novel “Love in Times of Vengeance” also to be published by Victorina Press in 2019. This is a very intense and gripping action – filled political thriller, set in 1970s, in a small Latin American country.

Zaverpi has finished another fully action-packed political thriller “The Search” dealing with the highly dangerous and illegal children trafficking, in Latin America in the 1970s and beyond. Before that, he wrote a collection of short stories “Tales at the Foothills of the Andes” depicting old folk’s tales from southern Chile. He is now working on another literary project “Bi–dimensional Love”. Passion running deep in the lovers’ veins while love nests in their hearts and tragedy is always lurking around on very corner and cheating and faithfulness are easily exchangeable. All the above titles have been written initially, in Spanish, which, hopefully will be published in the not too distant future.

Claudia, an idealist and brave young South America woman, suddenly finds herself amid a bloody military coup during the early 1970s. She goes to hell and back, as her husband, mother, father and brother-in-law were brutally murdered in cold blood. She manages to escape from the claws of her torturer, but the Death Squads are close on her tail. Far away from home, in exile, she has just had one think on her mind: to find Daniel, her torturer and the killer of her family. Year later, back in her native country, she tracks down her target, and is ready for her revenge. She is left with two choices, hand him over the authorities, or take the law into her own hands. But in the process, love creeps in. Will she be able to take her revenge, or will love forge a new path for her?