Nasrin Parvaz became a civil rights activist when the Islamic regime took power in Iran. She was arrested, tortured and sentenced to death in 1982. Her sentence was commuted to ten years imprisonment and she was actually released after eight years, in 1990. After her release, Nasrin resumed her activities and once again she found herself being followed by Islamic guards. She realised she could no longer stay in Iran and she fled to England, where she claimed asylum in 1993. She was granted refugee status a year later, and has since lived in London.

Since 2005, together with poet Hubert Moore, Nasrin has translated some poems, prohibited in Iran, from Farsi into English. They appear in the Modern Poetry in Translation series.

Nasrin is the guest artist of Our Lives, May 1st – 8th 2018 Exhibition of Art by Foreign National Prisoners. Her paintings were accepted for inclusion in the exhibition’s Calendar and for postcards. Nasrin’s stories have been published in Exiled Writers Ink magazine. Her article, ‘Writing in the ‘Host’ Language’, published in The Great Flight, MPT 2016 Number 1.

Nasrin has given talks on the violation of human rights in Iran, both in Farsi and in English, in a number of countries including Canada, Sweden, the UK and Italy. She talked at Leicester Secular Society (2018), Exiled Writers Ink, (2018), Bare Lit Festival (2016 and 2017), Southbank Centre (2015 and 2016), and for organizations such as Amnesty International, Cambridge PEN, the Medical Foundation, Saturday Forensic Forum (2013), Ledbury Poetry Festival and Eloquent Protest (2008). Nasrin’s stories were read at the Edinburgh International Book Festival.

Nasrin studied for a degree in Psychology and subsequently gained an MA in International Relations at Middlesex University. She then completed a Postgraduate Diploma in Applied Systemic Theory at the Tavistock and Portman NHS Foundation Trust, where she worked in a team of family therapists.

Nasrin created many pieces of artwork once she was released from the Iranian prison. One of her pieces, ‘Displaced’,  was shortlisted for the 2018 John Bird Prize – Open Competition at the Fishslab Gallery. 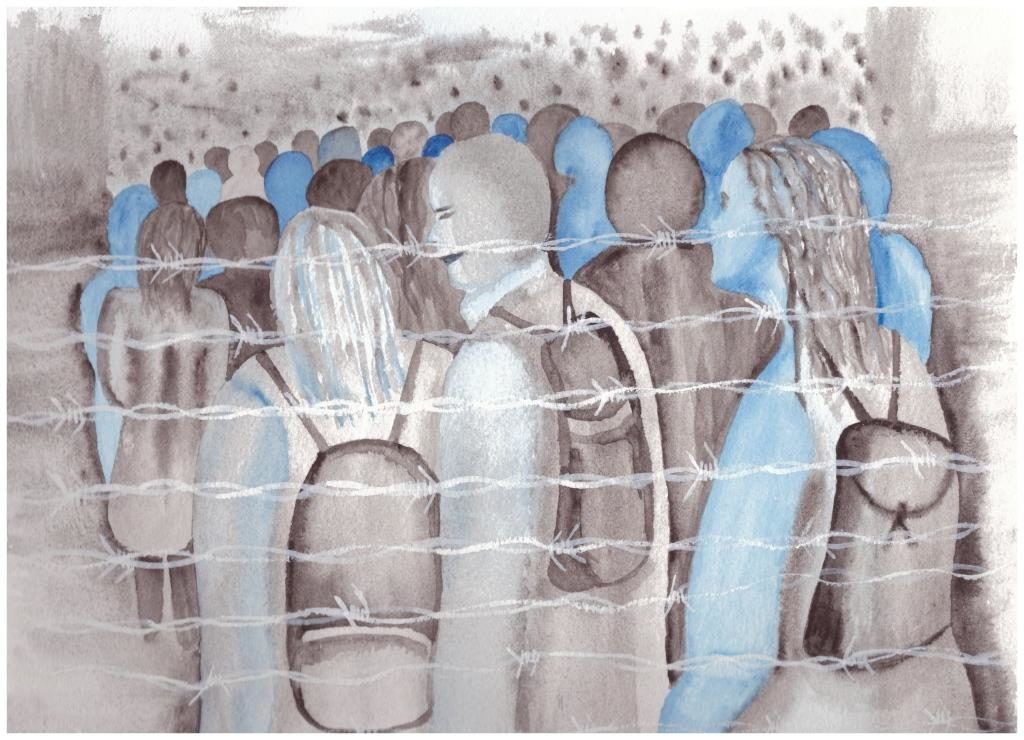 In 1979, Nasrin Parvaz returned from England, where she had been studying, and became a member of a socialist party in Iran fighting for a non-Islamic state in which woman had the same rights as men. Three years later, at the age of 23, she was betrayed by a comrade and arrested by the regime’s secret police.

Nasrin spent the next eight years in Iran’s prison system. She was systematically tortured, threatened with execution, starved and forced to live in appalling, horribly overcrowded conditions. One Woman’s Struggle is both an account of what happened to her during those eight years and evidence that her spirit was never broken. Nasrin’s memoir is a story of friendship and mutual support, of how women drew strength from one another and found endless small ways to show kindness and even find tiny specks of joy.

This book, however, is not simply about the prison system in Iran. It is about oppression – and especially the oppression of women – wherever it takes place. It deserves to stand with Primo Levi’s ‘If This Is A Man’ as an indictment of cruelty, brutality and the dehumanizing of fellow human beings.

…an absolute refusal to budge from her principles saves Nasrin, as does her writing, and her imagination.

Writer and artist Nasrin Parvaz spent eight years in the same Iranian prison where Nazanin Zaghari-Ratcliffe is now being held and has used the experience as inspiration for her novel. She says there are echos of Nazanin’s story in prisons across Iran.

When Faraz accepts his uncle’s offer of a summer job converting one of Tehran’s prisons into a museum of the repressive rule of Shah, he understands too late that this will mean destroying all evidence that the present regime, the Islamic Republic of Iran, has also tortured and executed prisoners there.

Haunted by the treachery of what he, a teacher of history, is required to do, Faraz discovers a series of secret notebooks written by Xavar, a young pregnant woman interned there in 1984 – and he realises there’s a way to redeem the situation.

Xavar is writing love letters to her husband Azad, with powerful testimony of what’s being done to her. Scrambling to find out more of her writing and piece her story together before the job finishes, Faraz becomes deeply involved. He cannot keep Xavar’s tragic history to himself – with dangerous consequences, in which past and present collide.

If the letters are discovered she will immediately be executed. Xavar’s rich, sensuous metaphors – flowers, sun, fish, human hands, music – express the internal life with which she, a factory girl with partying on her mind before her arrest, resists the regime’s attempts to crush her. They do not succeed. They take away neither her language nor her writing, her means of survival. She’s surprised at herself. ‘I was never aware of the mind’s capacity to cope with hardship,’ she writes.